Spain's PM: We support Bosnia on its path towards EU membership 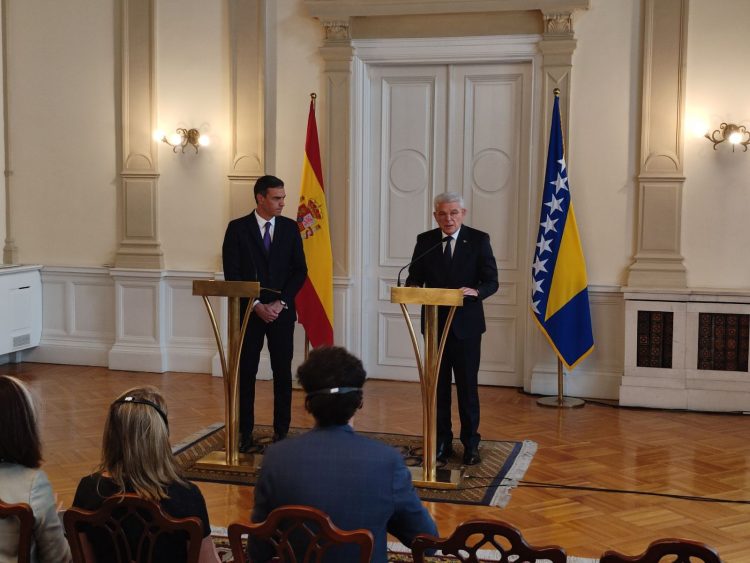 Spain’s Prime Minister, Pedro Sanchez, arrived on an official visit to Bosnia and Herzegovina and met with members of the BiH Presidency.

After the working meeting, the Chairman of the Presidency, Sefik Dzaferovic, addressed the media and said that BiH has a friend in Spain, which strongly supports BiH's efforts to achieve EU candidate status.

Dzaferovic said that Sanchez and the Presidency members discussed bilateral relations between the two countries, Bosnia’s EU path and the reforms the country must implement.

“The Kingdom of Spain will soon take over the presidency of the European Union. I hope that BiH will meet the conditions by then and become a candidate for EU membership by then,” Dzaferovic said.

Sanchez said that Spain strongly supports Bosnia in its reforms.

“We want to support you in reforms. I confirm that I will insist that the Western Balkans be present at the forum. The EU should give other countries a chance as soon as possible. Spain supports the territorial integrity of BiH, but also its path towards the EU,” Sanchez said.

He emphasized that the elections in October must be held, and that the country must show responsibility in this regard.

He also stated that he asked political leaders to reduce tensions and divisive rhetoric, return decision-making processes to institutions and put citizens and their interests first.

“We will always be with you, you can always count on the support of Spain”, he said.

The Spanish Prime Minister began his visit to the Western Balkans on Friday, and in addition to Sarajevo and Belgrade, visits to Podgorica, Skopje and Tirana are planned.