State of natural disaster declared in Neum due to wildfire 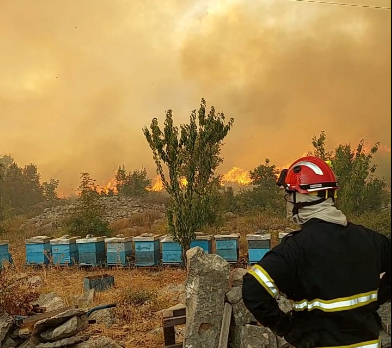 Authorities declared a state of natural disaster in the municipality of Neum due to the large wildfire that broke out in the area on Tuesday, August 2.

The fire in Neum is still active, but the situation is much better. Mountain Zaba was engulfed by the large fire which has meanwhile been put under control.

The decision to declare a state of natural disaster was made by the Mayor of Neum, Dragan Jurkovic, on a proposal by the local Civil Protection authority. The decision applies to part of the municipality of Neum, the settlements of Podzablje, Brocanac, Praovice and Prapratnica.

Numerous olive groves were destroyed in the fire. A large number of beehives, as well as other crops grown in this area, were destroyed and the municipality and its residents suffered enormous material damage.

The situation on the ground calmed down after three days during which many locals assisted the local firefighters, but also those who were sent from other municipalities and even Croatia, in extinguishing the fire.

The BiH Armed Forces also sent a helicopter to assist the firefighters on the second day.