Ukrainian journalist: Putin has not let go of his goal to destroy Ukraine 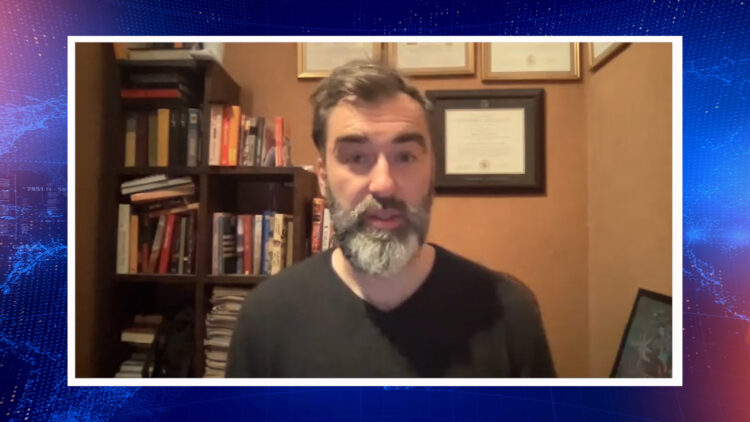 Ukrainian journalist and analyst Peter Zalmayev talks to N1 from Kyiv about the electricity situation, heating problems, threats coming from the American Republican Party regarding aid to Ukraine, and equating the fight against the climate and the war in Ukraine.

Well life kind of goes on, I wouldn't say as usual. It's obviously gotten much darker, and the days are getting shorter, so right about now, it's getting really dark and there's much less lighting on the streets, obviously, for economies, sake called rolling blackouts have been kind of a hazard now. There's not even a way to set certain times of the day, which used to be the case last week. It is no longer a luxury we can afford. So you can expect to have your electricity cut off at any moment. Usually, it doesn't last longer than two hours for me. But then I've heard some of my friends in other parts of the city tell me that they may have lights out for six, seven, or even 10 hours in a row. And already we've heard the mayor say to the New York times that possible evacuation of the city is in the cards. Meaning if the system doesn't cope, then that's what's gonna have to be done. And this has caused them kind of a scandal here because this was the first we are hearing about this. And this was shared with foreign media, not with us here. Obviously not to create panic, but some Ukrainians and some Kievans do read the New York Times. And so it got around and now there's this debate about whether it's likely that Kyiv will be evacuated. Obviously, if it does you cannot expect the entire city to go. But, if that happens, it's not something we haven't done before, haven't experienced that. If you remember early in the war, late February, early March, probably three-quarters according to some estimates of the city residents left and then they came back. Another thing I will notice is that this is something that takes getting used to this darkness where also traffic lights may go out for periods of time and you just have to rely on the individual drivers and their ability to navigate in this brave new world. But the number of accidents in Kyiv has grown by almost a third since we started having these problems.

Peter, President Zelensky, and other officials have told the world press and I spoke with the spokesperson of the Ministry of Foreign Affairs Oleg Nikolenko, that about 30 to 40% of the electrical grid is knocked out by Russian kamikaze drones attacks which are coming from Iran. How much time you will need to repair that and is there a plan for cold winter days? How to ensure heating for people in Kyiv, but also in other cities?

Well, I understand this sort of damage, and you're right, 30 to 40% is quite significant and that doesn't look like it's going to be fixed, entirely in its entirety anytime soon. Its damage is worth hundreds of millions of dollars. It's gonna have to require capital investment and major labor effort. Meanwhile, no one is saying that these attacks are stopping and we are in a static situation where we can just peacefully start to rebuild. This was a lucky day for us Monday. That's been the traditional Russian strike on a Monday. That has been the pattern of the last three Mondays. Nothing happened, at least I'll knock on wood, not this Monday. Not in Kyiv, in other parts of Ukraine yes, but not in Kyiv. But does this mean that Putin has had a change of heart and he's reconsidering? No, he has not let go of his goal to like destroy Ukraine. And so he will do everything to make our life miserable. If he cannot do it militarily, if he cannot really hurt our army to the point where they give up, he will make us civilians hurt. Russia is acting like a terrorist state. It is in fact now a terrorist state and many countries have now acknowledged that. And so the trick will be to do with what we can. I'll just refer to one particular plan in large cities, including Kyiv, which is creating large centers for the population to come and find heat. Let's say we are deep in December or January and the weather is below zero, significantly below zero, no amount of clothing will probably help you. You may have to go and spend time in this kind of shelter. There are already plans to create a hundred such shelters in Kyiv. We'll see how it goes. But you know, we are very much aware of what's coming and city authorities, federal authorities are doing everything they can to get ready for the worst eventuality.