Dodik blames “Muslims” for the crisis in BiH, denies authority of the High Rep 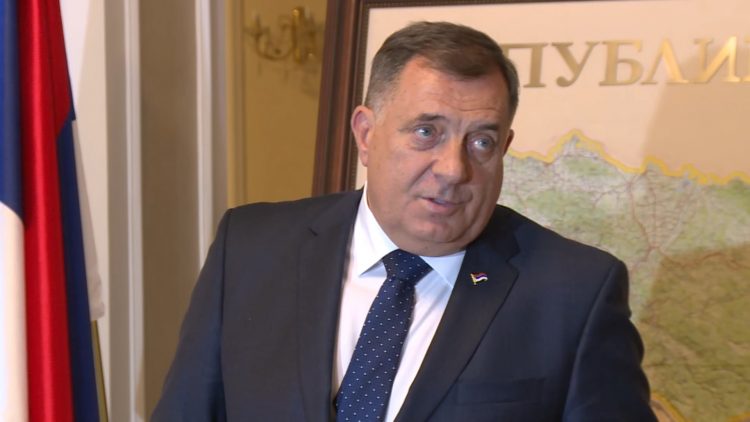 The leader of the ruling party in Bosnia's Republika Srpska entity and member of the tripartite BiH Presidency, Milorad Dodik, welcomed Wednesday’s adoption of a law seen as the beginning of the transfer of competencies from the state to the entity, blaming “Muslims” for the crisis that has engulfed the country.

The National Assembly of Bosnia's Republika Srpska (RS) entity passed a law that foresees the establishment of an entity-level agency for medicines that will take over competencies from the existing state-level agency.

It is the first step on the path Dodik promised his voters he would take to widen the autonomy of Republika Srpska.

He claimed that the aim of Bosniaks – which he referred to as “Muslims” – want to gain control over the whole country and erase its division into two semi-autonomous entities and that Bosnian Serbs are determined to prevent that by declaring certain state institutions, including the army, as having no competencies on RS territory.

On Wednesday he used an additional argument to emphasize this claim: the replacement of the country’s chief prosecutor, Gordana Tadic, thanks to the votes of only Bosniaks in the relevant council.

This, he argued, shows how the Bosniaks want to dominate the decision-making process in the country.

“They are finalizing their infernal plan to regulate that BiH looks the way they want it,” Dodik said, arguing that the Bosniak leadership is “not ready to compromise.”

Dodik did not mention that Tadic’s replacement is a Bosnian Serb.

Shortly before RS lawmakers adopted the law, High Representative Christian Schmidt, who is tasked with overseeing the civilian implementation of the 1995 Dayton Peace Agreement, said that such a move would represent a “dangerous and unnecessary risk to lives and wellbeing of all BiH citizens.”

However, Dodik never accepted the authority of the new High Representative, arguing that he was appointed illegitimately.

“BiH does not have a High Representative. Schmidt is misrepresenting himself, there is no High Representative until he is appointed by the Security Council. None of his statements mean anything, it is like a statement from an ordinary citizen,” Dodik said.

The Bosnian Serb political leader said he is not working against the territorial integrity of BiH, but that he wants to see the Dayton Peace Agreement implemented strictly according to the way it is written, “and not in its spirit.”

The peace agreement that contains the country’s constitution prescribes that entities have their own armies, judiciary, tax systems and many other competencies but also says that if the sides agree in the state parliament, those competencies can be transferred to the state, which is what happened over the years. Dodik now wants to undo those parliament decisions and has started his promised process of taking those competencies back.

Meanwhile, Republika Srpska has been shaken by a scandal called “Oxygen” – speculation that industrial oxygen was used on COVID patients, which, according to the opposition, killed many patients.

Dodik said that the RS opposition, which boycotted the vote on establishing the new agency, is using the issue in order to promote a “pro-Bosnian concept” and is imposing the topic of the number of infected and dead from COVID in the entity.

The RS National Assembly had also concluded that the oxygen used to treat patients in the RS were being treated with the proper quality of oxygen.

Dodik also said that the leadership in Sarajevo is “nervous because they overpromised the fairytale called Bosnia and Herzegovina. I believe that the RS is stable, that her institutions are stable,” he said.

He again mentioned the country’s top international official, High Representative Christian Schmidt who warned the National Assembly not to vote for the establishment of a separate agency.

“He was not appointed by the United Nations, and in Sarajevo they say that he is the High Representative. How is this country supposed to function then?” he said.

Dodik argued that RS political leadership is being accused of behaving contrary to the Dayton Agreement, although it insists on the implementation of it.

“The RS has no intention of entering the FBiH (Bosnia’s other entity, the Federation) with any security forces, we have the right to a constitutional configuration and we will ensure that,” he said.

In the end, he dismissed claims that keep coming from his opponents about widespread corruption in the RS and said that percentage-wise “regarding crime, we are better than Germany.”