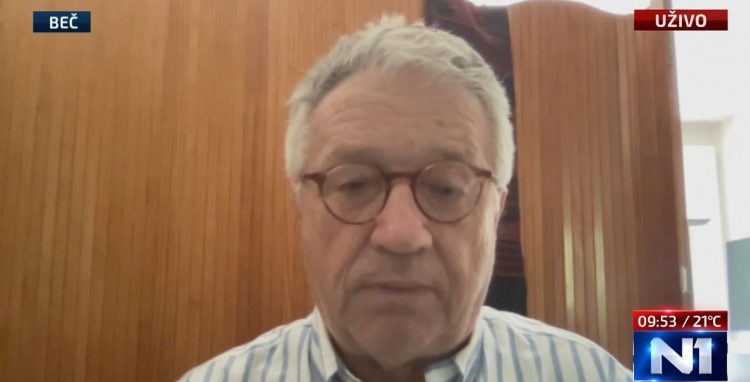 There will be no new conflicts in the Western Balkans, but there is a potential for terrorist attacks due to the tense situation in Kosovo, Former European Union envoy for Kosovo and former High Representative of the international community in Bosnia, Wolfgang Petritsch, told N1.

On Sunday, shots were fired in Kosovo after roads were blocked at several different locations in the north of Mitrovica in the direction of the two border crossings, Jarinje and Brnjak, which were closed to traffic.

The tensions were fueled by Pristina's decision to introduce a ban on the entry of citizens with Serbian identification documents at midnight on August 1 and to issue them three-month “entry-exit documents” instead, as well as to replace license plates issued in Serbia for cities in Kosovo with plates registered in Kosovo.

This decision was postponed for a month, and the strained relations between the President of Serbia, Aleksandar Vucic, and the Prime Minister of Albania, Albin Kurti, represent an additional concern which makes it difficult to reach a successful agreement.

Petritsch said that this is an indication of several problems that are interconnected.

“It's about the whole dialogue process not working. We haven't seen any progress in that dialogue, for months nothing has been initiated or changed,” Petritsch said.

The former EU envoy said he believes it is possible to reach an agreement.

He pointed out another issue, the war in Ukraine, arguing that the nervousness of the international community in Washington is increasing.

“And that is the reason that these two elements, the war in Ukraine and the lack of dialogue, led to this situation happening in Kosovo,” he added.

Petritsch said that, throughout the year, the President of Albania, Bajram Begaj, established good relations with Vucic, but that this is not the case with the Prime Minister of Albania, Albin Kurti.

“The way I see this dialogue process is that it is first necessary to establish mutual trust and respect. I think there is a lot of respect and political influence on both sides,” said Petritsch.

He warned that tensions may flare up again if no agreement is reached and that the EU Special Representative for the Belgrade-Pristina Dialogue, Miroslav Lajcak, as well as EU High Representative, Josep Borrell, should make additional efforts to start a dialogue.

“Also, both sides should understand that now the EU is extremely engaged in Ukraine and that it simply cannot allow the situation in the Balkans to get out of control,” he stressed.

He also noted that the USA played a decisive role in Kosovo and sent one of its best ambassadors, Christopher Hill, to the country.

“The USA plays a very important role in both Pristina and Belgrade”, he stated.

Petritsch stressed that, at this point, it is most important to implement the agreements that have been reached so far and that Washington should mediate talks to determine what is needed to establish a Community of Serb Municipalities in Kosovo.

However, the instituted that the Republika Srpska (RS) entity in Bosnia “cannot serve as an example for that.”

“Neither Brussels nor Washington want a new Republika Srpska and that is, unfortunately, a big problem. In Kosovo, we need to strengthen the position of the Serbs, so that the minorities get more rights and feel safe. So they use their own language and all their rights are ensured”, he stressed.

He said he does not believe that a new war could erupt in Kosovo or in BiH.

“What could happen now are terrorist attacks, but I am convinced that NATO is present, we have EUFOR in BiH. The geopolitical situation in the Balkans is now different. There are conflict countries that are surrounded by NATO and this is a positive change that positively affects the future of Bosnia and Herzegovina and Kosovo,” he said.

The EU must mediate in resolving issues in the region, he said, stressing the importance of BiH achieving EU candidate status.

“We saw that Ukraine got it and we need a repeated offer for Bosnia and Herzegovina and the other five countries of the Western Balkans to join the EU. This is something that needs to be worked on so that the conflicts that are happening on the border between Kosovo and Serbia do not happen again,” Petritsch said.