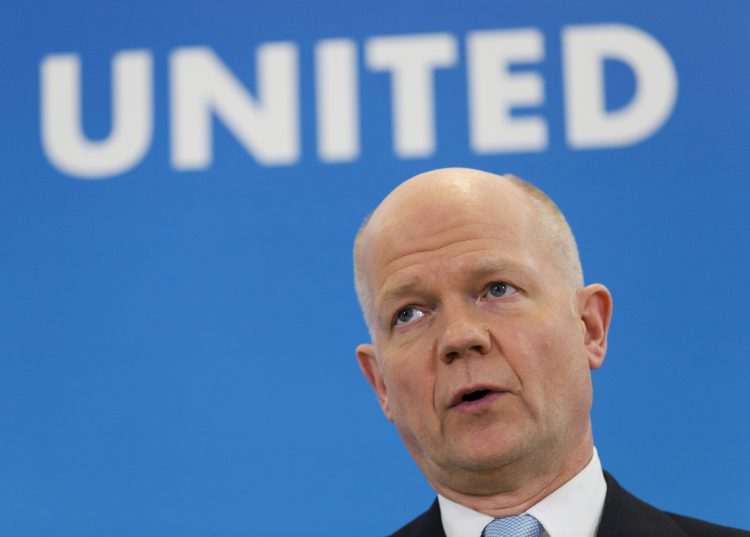 In his article entitled ‘If we falter the Balkans will explode again’, former UK Secretary of State, William Hague, warned that the political crisis in Bosnia could escalate if western powers do not respond to the Russian influence in the country and that this could also prove to be dangerous for all of Europe.

Hague wrote in an article for The Times that one of the things he never forgot from his first meeting with Putin a decade ago is that the Russian leader “wants to sell a lot of gas.”

According to Hague, Putin's political power in Russia is sustained by hydrocarbon revenues so he is always “focused on doing business” – and uses this natural resource as leverage in his political manoeuvres.

He argued that Putin is “adept at dividing European countries from each other, neutralising what he sees as the encroachments of the West on Russia’s sphere of influence through a mixture of social media explanation, clever diplomacy, military intimidation and turning on or off the gas.”

“Every weak point of each western country is assiduously exploited. Poland, estranged from its EU partners, is presented with a cruel refugee crisis on its border with Belarus. Hungary, lacking friends in Brussels, finds a new one in Moscow. The whole West is reminded of its strategic weakness by tens of thousands of Russian troops massing near Ukraine, making us wonder what we can do about it,” he wrote.

Hague argued that it might be easy for western governments to feel “fatigued” about the Balkans.

“Yet we do not have that luxury,” he warned.

Hague then went on to explain the political crisis in Bosnia in light of the announcements of Bosnian Serb political leader Milorad Dodik, who is currently a member of the tripartite BiH Presidency and is the leader of the ruling party in Bosnia’s semi-autonomous Republika Srpska (RS) entity. He noted that Dodik has been “undermining the state of Bosnia and Herzegovina with active Russian and Serbian support” for years.

“For Moscow, this serves the purpose of blocking the expansion of Euro-Atlantic institutions: Bosnia would be like Ukraine, Georgia and Moldova in being unable to join Nato or ever functioning as a normal country,” he wrote.

But this has intensified since recently and the situation has, as he put it, “become more grave.”

Hague warned that Dodik “is coming close to secession from Bosnia, a country delicately balanced between Croats, Bosniaks and Serbs.”

He was referring to the announcements of Dodik that he would roll back post-war reforms that led to the establishment of numerous state institutions in Bosnia – including the army. Dodik said he plans to form a separate army for the entity, and Hague warned that this is “the very institution responsible for genocide at Srebrenica.”

“He is seeking to capitalise on the weakness and distraction of the West to precipitate a crisis that leads to redrawing the map, with the territory he leads reattached to Serbia,” Hague said about Dodik, noting that this is a “direct challenge” to the 1995 Dayton Peace Agreement which ended the Bosnian war.

He warned that once someone manages to move country borders on ethnic grounds, “there are many more minorities whose location can be exploited to justify moving other borders – ethnic Serbs in Montenegro, ethnic Albanians in Kosovo, ethnic Russians in the Baltic States.”

This represents a threat to the security and stability of the European neighbourhood, he argued, citing the recent report of the international official overseeing the civilian implementation of the Dayton Agreement in Bosnia, High Representative Christian Schmidt, who warned that BiH faces “the greatest existential threat of the postwar period” and that “the prospects for further division and conflict are very real”.

He noted that, meanwhile, the EU has opted for “dialogue” – “amounting to appeasement and weakness.”

Hague called on the UK and EU to join the US in imposing sanctions on those undermining the peace agreement and argued that western nations should reaffirm their support for the High Representative.

He also called for bolstering the EUFOR forces in Bosnia with NATO troops, “deployed to strategically critical areas such as Brcko and Tuzla airport.”

“That might sound dramatic, but it is only strength, determination and readiness to act that will deter a great deal of trouble,” he argued.

Hague wrote that “the collapse of Afghanistan indicates what happens when the West loses heart and exhausts its attention span” and warned that the same “cannot be allowed to happen within the continent of Europe.”

“Sometimes the West must look into those cold Putin eyes and face down his tactics and acolytes,” he wrote.