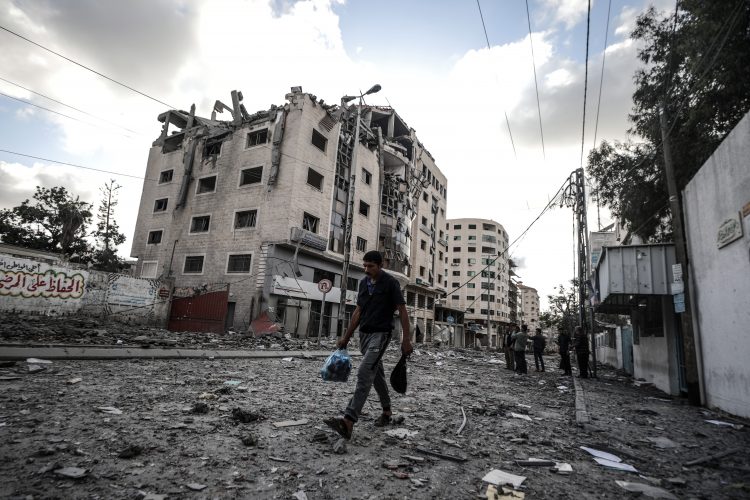 Israeli warplanes launched a fresh round of massive airstrikes in Gaza on Monday as the most serious conflict in years entered a second week and international calls for a ceasefire mounted.

Dozens of Israeli jets bombed more than nine miles of Hamas’ tunnel system in Gaza overnight and targeted nine residences Monday that the Israeli military said belonged to commanders from the Palestinian militant group.
Israel's military said it had struck more targets in Gaza in the past week than it did in all of 2020. About 3,150 rockets have been fired from Gaza at Israeli territory since last Monday, though the Israeli military said many had either fallen short or been intercepted by the Iron Dome aerial defense system.

Israeli strikes have killed 200 people in Gaza, including 59 children and 35 women, and displaced 40,000 more, the Hamas-run health ministry in Gaza said Monday. Sunday was the deadliest day yet with more than 50 killed, the ministry said.

The ministry also warned Monday that Israeli strikes on homes, medical facilities and infrastructure had created the conditions for an “upcoming wave” of Covid-19 cases, and that those fleeing to shelters would be “exposed to the spread of infectious diseases, especially the danger of spread of the coronavirus.”

The Israel Defense Forces on Sunday released photos purporting to show Hamas rocket installations and tunnel entrances placed in close proximity to civilian infrastructure like hospitals and schools. The IDF said that “Hamas deliberately and systematically places military targets within the civilian population, exposing their citizens to danger.”

Meanwhile, rocket fire from Gaza has killed at least 10 people in Israel, including two children, since the start of the flareup, according to the IDF. On Monday, a fresh barrage of rockets from Gaza once again set off sirens and sent Israelis fleeing into bomb shelters in Ashdod, Ashkelon and Beer Sheva. At least one residential building in Ashdod was hit, the IDF said. Three people were slightly injured, the Israeli Red Cross said.

Israeli Prime Minister Benjamin Netanyahu said Sunday that he would do “whatever it takes to restore order,” and that “it will take some time.”

During an emergency meeting of the United Nations Security Council on Sunday, UN Secretary-General António Guterres pleaded for peace lest an “uncontainable security and humanitarian crisis” erupt that would “further foster extremism” in Israel, the Palestinian territories and the region writ large.

Egypt and Qatar's efforts to broker a truce have stalled over two main points, a senior Hamas leader with direct knowledge of meditation efforts told CNN on Sunday.

One stumbling block is Israel's insistence that Hamas must initiate the ceasefire, at least three hours before Israel, at which point Israel would follow. Hamas flatly rejected this proposal, the Hamas leader said.

The other hurdle is Hamas’ insistence that any ceasefire must include the ending of Israel's “provocations” at the Al Aqsa Mosque in Jerusalem and a resolution of the Sheikh Jarrah eviction threat, the Hamas source said.

Several Palestinian families are fighting legal efforts to remove them from their homes in the Sheikh Jarrah neighborhood of East Jerusalem, one immediate factor that sparked the current round of hostilities. Tensions have since escalated rapidly into the worst round of violence the area has seen since the 2014 Gaza War, which saw more than 2,200 Gazans killed during the fighting, approximately half of them civilians, including more than 550 children, according to a United Nations report.

Americans are also involved by putting pressure on the Qataris and Egyptians to bring about a ceasefire agreement, the source added.

On Sunday, US Secretary of State Antony Blinken held five calls with the foreign ministers of Saudi Arabia, France, Qatar, Egypt, and Pakistan during a flight to Copenhagen.

The flurry of diplomatic activity came on the deadliest day yet of the conflict. Israeli strikes killed least 52 Palestinians in Gaza on Sunday, the health ministry there said.

Israel also found itself on the defensive over the weekend after it levelled a Gaza building containing offices for international media outlets Al Jazeera and the Associated Press. The Israeli military said the building contained Hamas military intelligence assets.

The AP said in a statement that it “had no indication Hamas was in the building or active in the building,” and called on the Israeli government to “put forward the evidence.”

Blinken said Monday that he had not personally seen the intelligence behind the strike, but that US had asked Israel for more details “regarding the justification” for destroying the tower.

In an interview with CBS over the weekend, Prime Minister Netanyahu said the tower was a “perfectly legitimate target” and that the Israelis had shared the intelligence behind the decision with the US.

“Well, we share with our American friends all that intelligence,” Netanyahu said. “We pass it through the intelligence services to our people, to those people.”

Reporters Without Borders, an NGO that works to protect journalists around the world, said in a statement it was calling on the International Criminal Court to investigate. RSF Secretary General Christophe Deloire said in a statement on the group's website that “deliberately targeting media outlets constitutes a war crime,” and that the Israeli strikes were “obstructing media coverage of a conflict that directly affects the civilian population.”

Rashard Rose contributed to this report from Washington.