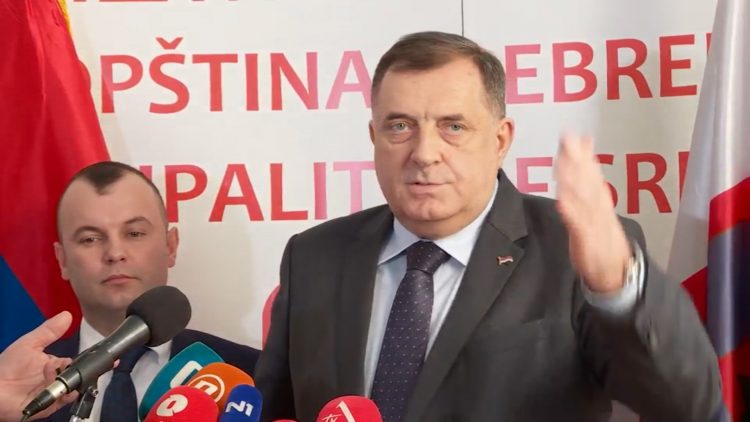 If Bosnia’s Central Election Commission (CEC) continues behaving this way, the ruling party in Bosnia’s Republika Srpska (RS) entity is “serious in its intention” to not allow elections to take place in 2022 in municipalities where it has a majority, the leader of the party and Bosnia’s Presidency Chairman, Milorad Dodik, said on Thursday.

Dodik, who is the Serb member of the tripartite state Presidency and the leader of the Alliance of Independent Social Democrats (SNSD), made the statement after meeting with Srebrenica mayor Mladen Grujicic to discuss the repeated local election in the eastern town, which is set for Sunday.

The CEC annulled the November 15, 2020, local election results for the towns of Doboj and Srebrenica due to numerous irregularities and alleged election fraud and set the date for repeat elections in the towns for February 21.

The SNSD and other parties in the semi-autonomous Serb-majority RS entity appealed the decision, but the Court of BiH rejected their appeal.

Dodik said that the SNSD always pointed out that the composition of the CEC was not legitimate and that the party only agreed to holding the repeated election to avoid the entire system breaking down.

“If the CEC remains like this, the big question is how the elections will be held in 2022. We are serious in our intention not to allow elections totake place in municipalities where the SNSD is the majority,” Dodik said, adding that the party has 43 mayors and that it is considering “to not allow people to vote at all on election day.”

Dodik argued that “what happened in Doboj and Srebrenica shows that this was a political decision.”

He then commented on the announced boycott of the election in Srebrenica by the Bosniak ‘My Address: Srebrenica’ coalition.

The coalition is also unhappy with the CEC, arguing that it should have also annulled the mail-in ballots for the Srebrenica election. This is why My Address: Srebrenica also said it would boycott the repeated election and said it would call on all of its supporters to not go to the polls on Sunday.

“They did not get what they wanted and now they are announcing a boycott,” Dodik said.

He urged all voters in Srebrenica to go to the polls “if they care about normalising relations.”

“Local people, Bosniaks, are too attached to Sarajevo, which takes care only of itself. Bosniaks here and anywhere in Republika Srpska cannot complain about their condition. Today they live stable lives, peacefully, no one disturbs them,” he said.

Bosniaks have the complete freedom to vote or to boycott, but the latter would be the wrong choice, he added.