Komsic to High Rep: Constituency of peoples used to promote dissolution of BiH 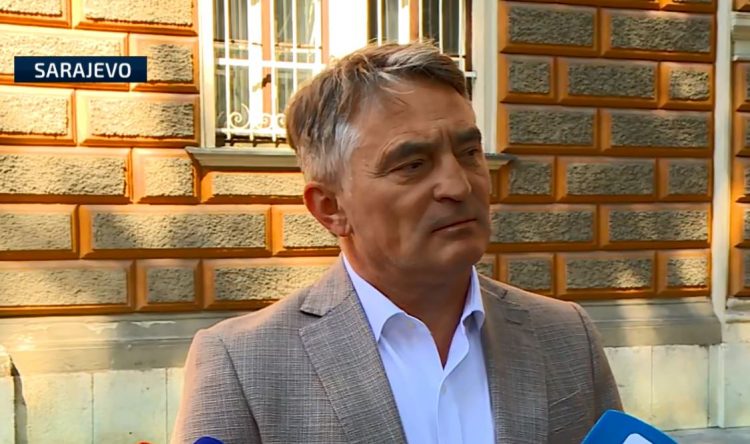 The Croat member of Bosnia’s tripartite Presidency, Zeljko Komsic, said he told High Representative Christian Schmidt on Tuesday that the narrative of the constituency of Bosnia’s three majority ethnic groups is being used to promote ideas of a “peaceful dissolution” of the country and that such a move can never be peaceful.

Komsic met with Schmidt, the international official tasked with overseeing the civilian implementation of the 1995 Dayton Peace Agreement, in Sarajevo on Monday.

Komsic said that “relations between BiH and Serbia and the indiscriminate arrest of our people” was also discussed at the meeting, referring to the arrest of a former top police official of Bosnia’s Federation (FBiH) entity, Edin Vranj, who was arrested in Serbia on Sunday as a war crimes suspect.

“It brings insecurity. I talked about Serbia not extraditing war criminals, hiding them, and sometimes they even claim that they are not on the territory of Serbia. I think we will enter a phase when we will not be able to boast of good bilateral relations,” Komsic said.

The Croat Presidency member told reporters that Schmidt does have a right to impose a new election law, but not if it is not in line with the Constitution.

“Our Constitution is not complicated, but it is layered, and as far as the Election Law is concerned, you have the right to impose it, but you also bear the consequences. It will be your responsibility and not ours. We have submitted a paper concerning the decriminalization of the election process so that BiH can finally get at least fairer elections and election results,” he said.

“I said that any solutions on the Election Law cannot be beyond the standards in Europe and what is the policy of Brussels, and even the Government of Germany. We checked whether there was a change in the position of the German Government when it comes to solutions for the Election Law in BiH, then (Angela) Merkel's office told us that there was no change, that is, that Germany was behind the statement on May 6 where they said that what we have in BiH, at this moment, it is starting to be a problem,” he stressed.