Kosovo PM: We won't allow establishment of another Republika Srpska in Kosovo 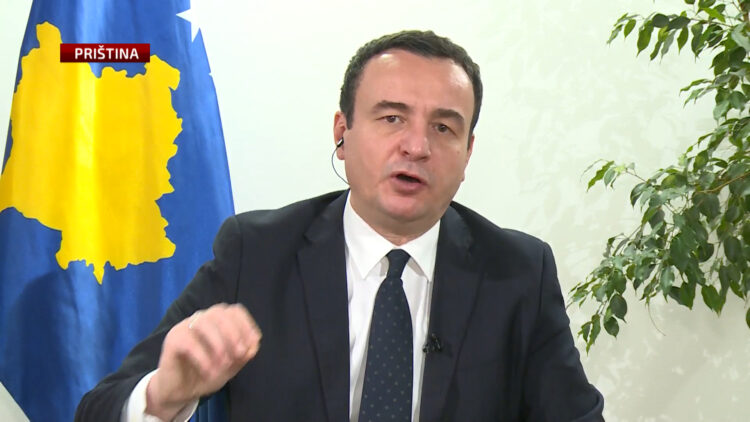 The Prime Minister of Kosovo, Albin Kurti, told N1 on Wednesday that the establishment of a Community of Serb Municipalities will not be allowed because he does not want Kosovo to end up with a political structure similar to Bosnia’s semi-autonomous Republika Srpska (RS) entity.

Kurti spoke about the relations between Kosovo and Bosnia and Herzegovina, mentioning the fact that it is very difficult to enter Kosovo from BiH and vice-versa. He explained that he had to go to the BiH Embassy in Skopje to get a visa and visit the country so he can attend the Srebrenica Genocide commemoration event.

“We have many obstacles between Pristina and Sarajevo, but I think that these obstacles come only from Belgrade. Serbia considers Bosnia and Herzegovina to be a temporary state and is working to divide it through Republika Srpska,” he said.

Kurti said he is willing to visit Sarajevo, but that it depends on the circumstances because these months are “important” for the entire region.

“I hope that the government in BiH will be formed as soon as possible and that we will establish a bridge between Pristina and Sarajevo. We must visit each other as often as possible,” he said, adding that he has good relations with many BiH officials.

He went on to comment on the 1995 Dayton Peace Agreement which ended the war in BiH and contains the country’s Constitution.

“I remember those years well, in the mid-nineties when the Dayton Peace Agreement was made and those who were optimistic said then that it would stop the war and enable inclusiveness. But unfortunately, that inclusivity was degraded into a veto power for Republika Srpska. Instead of the RS being integrated into the state, it became the opposite – a weapon of Belgrade against the integrity of Bosnia and Herzegovina. We should all remember the motive and goal of the Dayton Agreement which is being abused by Banja Luka (the administrative centre of the RS entity) every day,” he said.

Kurti recently said he expects an agreement on mutual recognition between Kosovo and Serbia to be signed by spring.

He told N1 that Kosovo wants an agreement and dialogue, but that it seems that Belgrade and Serbia’s President, Aleksandar Vucic, do not.

“Kosovo is a normal country, we declared independence almost 15 years ago and in the last year, we had the highest historical growth. We have also improved our position by 17 places when it comes to the fight against corruption, according to Transparency International, as well as when it comes to media freedom. As for the rule of law, we are the first in the Balkans. So Kosovo is a normal country with progress and development, but our relations with Serbia are not normal,” he said.

“It's not about Kosovo, Serbia is not a normal country. It is an autocracy with very broad and close ties to the Kremlin,” Kurti stressed, adding that throughout the rule of the Serbian Progressive Party (SNS), Serbia became “a province of Russia.”

“And that is why the situation in the Balkans is dangerous because, in addition to fighting the hegemony of Belgrade, there is also Russia. Kosovo has its own army and police and is a much more democratic country than Serbia, and Kosovo's independence is much greater than in Serbia, which is dependent on Russia. In terms of economic growth, we are ahead of Serbia. In Serbia, the opposition cannot win, and in Kosovo, as the opposition, we proved that we can take over power. It is the main test of democracy. You know that the opposition has no chance of winning in Russia either. We are careful because we border a non-democratic country,” he said.

Kurti resolutely rejected the establishment of a Community of Serb Municipalities in Kosovo, explaining his position in detail and comparing the situation to BiH.

“Kosovo will not allow a Republika Srpska within Kosovo and we know very well that this is what Serbia wants. We have a bitter experience when it comes to BiH and we are very careful to prevent Serbia from copying that model in Kosovo,” he said.

“On April 26, 1991, 14 municipalities with a majority Serb population formed a community. Then on January 9, 1992, they declared independence, and on February 28, they received a constitution. On December 14, 1995, unfortunately, they received international recognition in Dayton. So they want to create a state within a state by gradually incriminating actions. Bosnia and Herzegovina is a state, not a republic because it has a republic within itself that is not a state. In the Republic of Kosovo, they would like Kosovo not to be a state, and they would like the Community of Serb Municipalities, which would be a state of Serbia within the Republic of Kosovo,” he explained.

Kurti said that Serbia’s goal is “destructive” and that Serbia’s political leadership is not working for the benefit of Serbs in Kosovo, but rather against Kosovo itself.

“If they wanted a Community of Serb Municipalities, they would first have to recognize Kosovo,” he said.

Kurti stressed that Kosovo is a “success story”, primarily thanks to the intervention by NATO and the Kosovo Liberation Army.

“In 1999, 19 countries had to intervene against Slobodan Milosevic in order to prevent a genocide in Kosovo,” he said.

According to Kurti, Vucic has not distanced himself from the policy of former Serbian President, Slobodan Milosevic, even to this day.

“I think it goes deeper than that. When he came to Mitrovica in the north of Kosovo in 2018, he quoted Nikolaj Velimirovic, meaning he quotes people who collaborated with the Nazis,” he said.

“It is not possible for Serbia not to face its past and not to allow democratic forces to come to the scene. It takes a lot of systemic violence to maintain this situation,” he said, stressing that “Vucic is a man of violence.”

Kurti argued that this violence can be seen in Kosovo on a daily basis through “criminal gangs and parallel structures” and that Serbs in Kosovo are well aware that they lack rights “precisely due to those structures run by Serbia.”

“In that case, cooperation with Serbia will no longer be possible if it enters into closer relations with fascist Russia. You know, fascism is not only reserved for Italy and Germany. Belgrade cooperates with Russian fascism, and democratic Europe cannot be neutral towards such a Serbia,” he said.