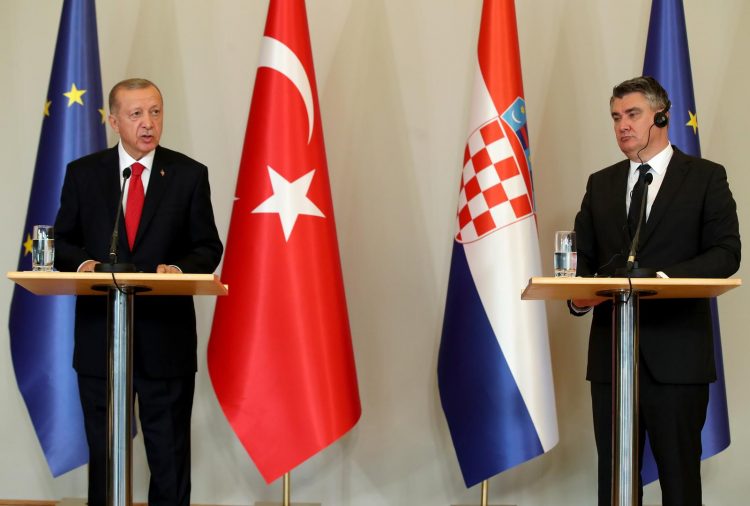 Turkish President Recep Tayyip Erdogan met with Croatian counterpart Zoran Milanovic while visiting this country where, in addition to inter-state relations, he talked about Bosnia’s Election Law reform. Speaking about the reform process, he said that representatives of the three constituent peoples (Bosniaks, Croats and Serbs) can agree on this issue among themselves.

“If you ask me why this problem exists, it arose because of the Dayton Agreement, which didn’t solve the problems in BiH, but, I’ll quote the late Alija Izetbegović [former BiH President], ‘at that time, nothing else could have been done, we had to sign it’,” which actually means that he wasn’t satisfied with it either. Today we have Bosniaks, Croats and Serbs living in BiH, then entities, leaders who represent these peoples, and I believe that decisions in BiH should be made by these leaders by meeting and deciding on it,” Erdogan said.

He noted that there are also certain mechanisms.

“Mechanisms in which we, as Türkiye, find ourselves as well as Croatia and Bosnia and Herzegovina. We also have a trilateral mechanism consisting of Türkiye, Serbia and Bosnia and Herzegovina and we can meet from time to time and discuss this, especially after the General Elections [in BiH], which will be held on October 2. Therefore, we can meet more often and speed up that process because the unity and integrity of BiH are of great importance. Bosnia paid a heavy price for that, and I don't want anyone paying anything like that in the future,” Erdogan added.

Milanovic pointed out that everyone is trying their best to correct some injustices and direct violations of the Dayton Agreement, which is the basis of peace in BiH and “which is an agreement on the sharing of power” in the country.

“The agreement is terribly delicate and whatever you touch or skip in it, you threaten the whole Agreement,” he said after the meeting with the Turkish President.

“I expected that others would be even more engaged in this, and I don't know what the High Representative in BiH will do, so far he hasn’t done anything. If he does something, I will have to admit that I will be satisfied with him. Mr Erdogan and I, Croatia and Türkiye have different opinions on this. This shows that we need more substantive conversation, not protocol but detailed conversations to highlight some of our problems and fears that Turkey may not be aware of due to its size and distance. Therefore, Croatian politics is a complete, normal BiH with which Croatia will have good relations, and BiH with Croatia and sometimes boring relations, but that's not bad either,” the Croatian President concluded.