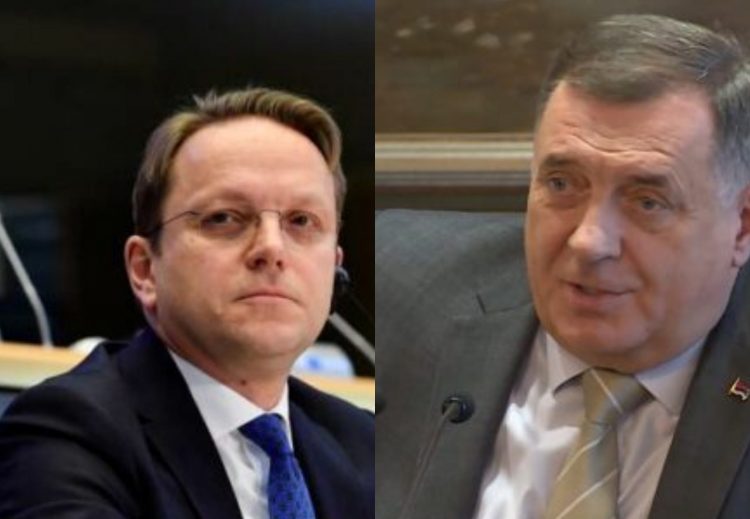 In their latest analysis of the scandal involving the EU’s Enlargement Commissioner and Bosnian Serb Presidency member Milorad Didok, the Democratization Policy Council states that the EU official’s actions directly aid the break-up of Bosnia and Herzegovina, and reward Dodik and Dragan Covic, the leader of the Croat Democratic Union (HDZ BiH) for their wrongdoing.

Below is the full text of their analysis:

“Placing the enlargement portfolio and its resources in the service of the agenda of the EU’s first – but not only – avowed illiberal leader was never a good idea. But its full toxicity has blossomed in Bosnia.

Reading EU Special Representative Johann Sattler’s November 25 report, leaked by Istraga.ba, illustrates the depth of complicity between Commissioner Oliver Varhelyi and BiH Serb Presidency member Milorad Dodik. The Oliver Varhelyi package that the readout note reflects is even worse than what he related in his statement on November 25.

That Oliver Varhelyi explained the deal to EU ambassadors on Nov 25 – BiH’s Statehood Day – is perverse. It seemed tailored to show that Oliver Varhelyi and others hold NO respect for BiH, its people, or history. Nor do they want to offer any hope to anyone who wants the country to have a better future.

The report confirms the package deal we identified the same day. At the same time, it is open blackmail on display, a “unique opportunity” (call now!) to throw hundreds of millions of euros at the very same person who created the current crisis.

Placing the enlargement portfolio and its resources in the service of the agenda of the #EU’s first – but not only – avowed illiberal leader was never a good idea. But its full toxicity has blossomed in #Bosnia.

It feigns legitimacy via the EU’s 14 Key Priorities. But what matters are the gifts: an election fix for the leader of the strongest Bosnian Croat party – the Croat Democratic Union’s (HDZ BiH) Dragan Covic; a state property giveaway for Dodik (& the others, too); and rescinding the genocide denial law.

The first two will be irreversible in terms of breaking up the state. The third constitutes an ignominious retreat in favour of leaders who deny genocide and glorify war crimes. For the country’s citizens, ‘Others,’ national minorities, anti-fascists? ZERO.

This package constitutes a soft electoral partition plus a property devolution. This kleptocratic giveaway will magnify corruption and party capture. The idea that the justice sector could ever be strengthened on such a foundation is laughable. And there will be consequences…

The spoiler-focused ‘diplomacy’ now on full display will hasten emigration. This will have the biggest impact on the already barren and impoverished RS. The EU is fooling itself if it thinks emptying cities across the RS reflect confidence in Dodik’s long tenure.

But even inward-looking Europeans should be worried about an ever more lawless oligarchy on their frontier. Organized crime and corruption (including along the borders) will flourish, fueled by the proceeds of the asset-stripping the envisioned property giveaway will entail.

MEPs and EU member state MPs – should be alarmed not only at the nature of this appeasement, but that some of this money is coming from the Western Balkans Green Agenda Fund. Eco projects will be used to cloak more infrastructure in support of partition and separation.

The new German govt should push back HARD on this policy & work to align other members against it (and FOR a BiH and regional policy review/reset).

Not only would it destabilize the region, but it would demonstrate just how willing the EU is to throw money at right-wing extremists to camouflage protracted failure and fake ‘success.’

The US and UK, together with Germany, Benelux, Czechia, Spain, the Baltic States and any other EU states ready to push back against the now visible fruits of an EU foreign policy machine being steered by Orban, need to publicly disown this package and rein-in its architects.

The Oliver Varhelyi package constitutes a security threat to the EU and NATO. But it is also a repudiation of the principles that the Biden administration claims it aims to rejuvenate.

Those in the EU machinery who see this for what it is – appeasement that will strip all values from EU foreign policy and make transactionalism with autocrats ‘business as usual’ – have a responsibility to resist it.

Citizens tired of corruption and dysfunction need to push back, to take back control from the local and EU leaders behind this deal. A new ‘social contract for the 21st century’ (as Baroness Arminka Helic put it) IS possible, but not if this toxic Oliver Varhelyi package becomes a reality.”