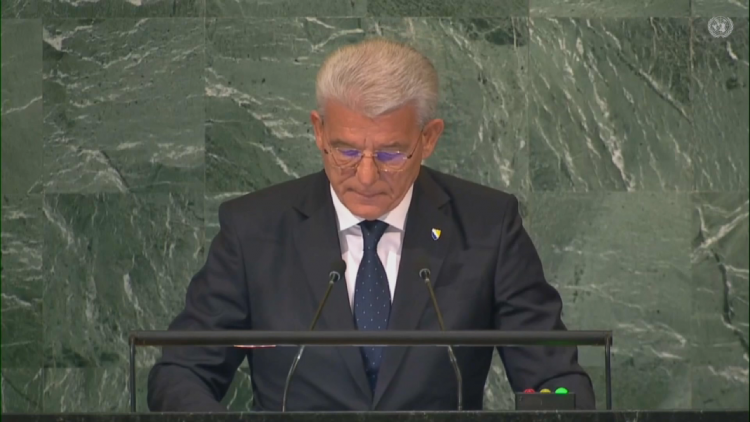 It is very important for peace and stability in Bosnia and Herzegovina and the Western Balkans that EUFOR’s mandate in the country is extended at the upcoming UN Security Council vote, BiH Presidency Chairman, Sefik Dzaferovic, told world leaders at the United Nations General Assembly on Wednesday.

At the beginning of his speech, Dzaferovic spoke about the war in Ukraine, saying that at a time when towns and villages in Ukraine are facing the terrifying reality of war, the least we can do is not to be silent about it.

“We must not be silent, especially in this building, in the United Nations, which was established with the aim of preventing and stopping what is currently happening in Ukraine. Finally, we in Bosnia and Herzegovina, who ourselves have a vivid memory of the horrors of war and aggression, must not be silent. As was the case in my country in the period between 1992 and 1995, the United Nations system, unfortunately, was again unable to prevent or stop the war in Ukraine. I am primarily referring to the Security Council, as a body responsible for the protection of international peace and security, in the light of the principles defined by the Charter of the United Nations”, said Dzaferovic.

He stressed that, unlike the Security Council, which is obviously unable to fulfil its obligations due to internal relations and blockades, the General Assembly of the United Nations, by an overwhelming majority, adopted the resolution on aggression against Ukraine.

This resolution was also supported by Bosnia and Herzegovina, which “stood on the right side of history, together with 140 other countries, and in accordance with the obligations from the UN Charter, our earlier positions and our obligation, according to the Stabilization and Association Agreement, to follow the foreign policy of the European Union of the Union,” he said.

He emphasised that the war in Ukraine, as well as the consequences of the pandemic, led to huge changes in all spheres of life and to a deep energy crisis, inflation, recession and a threat to the food supply.

Dzaferovic said that “most of the European continent is facing an energy crisis, due to dependence on Russian gas.”

He argued that nobody in the modern world has enough resources to be able to rely only on themselves and that past crises show that even dependence on individual external sources is not enough. Both of these difficulties can only be overcome through even greater international cooperation, he said.

“In the coming period, we will face huge challenges. We must fulfil our duty, and fight for civilizational ideas. We have to defend them, at any cost”, he pointed out.

“As a place where cultures meet, Bosnia and Herzegovina has been a thorn in the side of politics, which are based on the idea of the impossibility of living together and the necessity of confrontation. Such policies led to a terrifying war in Bosnia and Herzegovina, from 1992 to 1995, which culminated in the genocide in Srebrenica. In the resolutions of the General Assembly and the Security Council of the United Nations from the mentioned period, as well as in the reports of the UN Secretary-General, and finally, in the judgments of the International Criminal Court based in The Hague, the war in Bosnia and Herzegovina is qualified as an international armed conflict, with the participation of neighbouring state”, said Dzaferovic.

He stressed that, since the Dayton Peace Agreement was signed, BiH has been going through a difficult peacebuilding process.

“However, there are still numerous challenges, and the biggest is the policies in Bosnia and Herzegovina and the neighbourhood, which have not given up on the wartime goals of dividing the country. As part of a broader wave of right-wing populism in Europe, there are politicians in Bosnia and Herzegovina who openly claim that Bosnia and Herzegovina is not possible, because, as they point out, it is not possible for Muslims and Christians to live together. Muslims and Christians live and can live together. And that life has a perspective. And what certainly has no perspective are the retrograde policies that oppose it,” he said.

Dzaferovic then went on to speak about the role of the High Representative of the international community in Bosnia and Herzegovina.

The BiH Presidency member stated that in less than a month there will be a new vote in the Security Council on EUFOR's mandate in BiH.

“It is very important for peace and stability in Bosnia and Herzegovina and the region that this resolution is adopted, but it is worth emphasizing that in any case, according to the Dayton Agreement, the NATO alliance has the right and obligation to deploy its forces in Bosnia and Herzegovina. Also, there are decisions of the Presidency of Bosnia and Herzegovina which give consent to the presence of EUFOR and NATO forces, without time limits, and the said decisions are a sufficient legal basis for the presence of an international military mission in BiH until the Presidency of BiH takes a different position,” he said.