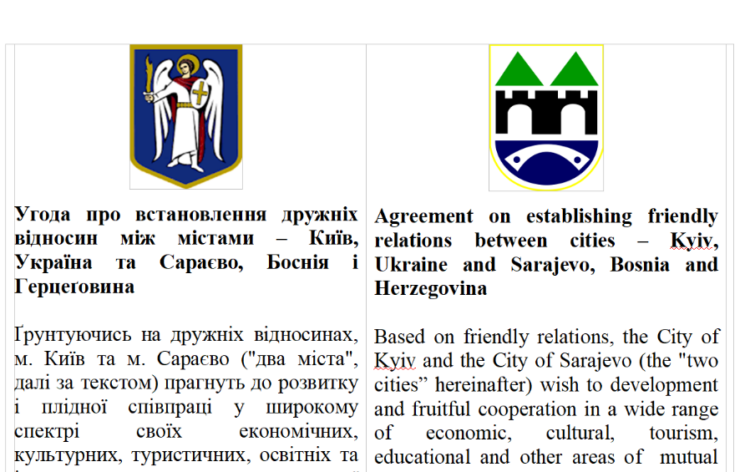 The mayor of Sarajevo, Benjamina Karic, and the mayor of Kyiv, Vitali Klitschko, are expected to sign an Agreement on establishing friendly relations between the two cities on Monday.

Karic previously accepted Klitschko’s invitation to attend the Kyiv Investment forum, which will due to security reasons take place in Brussels this year, on November 28.

Here are the contents of the agreement which the Ukrainian delegation will present to Karic at the summit:

The cities of Kyiv and Sarajevo together profess European values ​​of democracy, freedom and the rule of law. The two cities are committed to human rights and the principles of international law and promote peaceful coexistence in Europe.

According to the legislation of each municipality and the state, on the basis of the principles of equality and mutual benefit, friendly relations will be established between the two cities and cooperation in various fields will be strengthened.

In accordance with the principles of equality and reciprocity, the two cities agreed to strengthen cooperation and exchange of experiences in the areas of public space planning, infrastructure projects, new technologies, science and culture, tourism and other areas to support the prosperity and development of both cities.

The two cities shall endeavour to provide mutual support in crisis situations by providing humanitarian assistance, and political and economic support.

This Agreement does not affect other inter-city relations of any of the cities, and does not grant special or privileged legal statuses and rights to either party.”

It also says that the agreement consists of two original copies, printed in Ukrainian and English and that both are equally authentic and valid