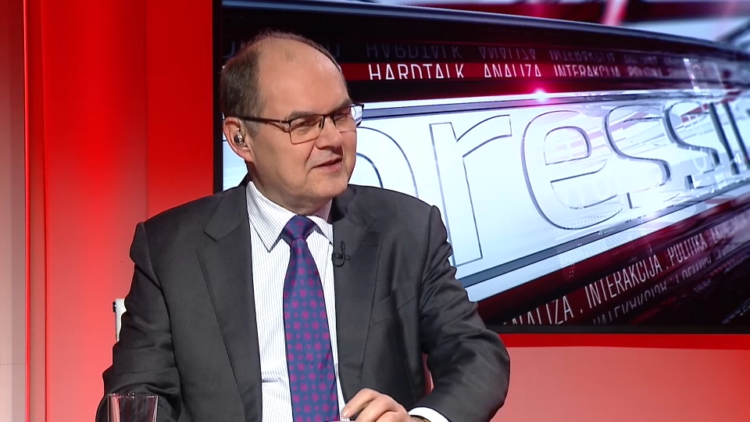 The High Representative in BiH, Christian Schmidt, said in an interview with N1 that he is "convinced that the next January 9 will look different. You know I can be kind, but also very harsh. I will definitely do some things.” He also criticised Republika Srpska (RS) entity President Milorad Dodik, who continuously refers to the "original" Dayton Agreement by saying "this match is mine. I am an interpreter [of the Dayton Peace Agreement]. Previously, Dodik experienced what happens if he doesn’t comply with the Dayton Agreement. And all those stories about the original Dayton are a smoke screen - he's got to learn that."

Schmidt advised Dodik to distance himself from Russian President Vladimir Putin and that, before awarding him, he should have seen what was happening in the region.

“I have nothing against the RS and Federation (FBiH) entity having their own day to celebrate. I think that some orders from above cannot make something really work, it has to grow from below, from the base. I think lately things have gotten better and I hope they will continue to get better. I promise we have a whole bunch of ideas we want to implement so we'll see how that develops. I am very convinced that next January 9 will look different. It doesn't matter if it's January 9, March 1 or some other day,” Schmidt told N1.

The High Representative said that he was informed about the procession in Istocno Sarajevo and that there were no Istocno Sarajevo residents, but people who arrived by bus from other places.

When asked if he would do anything to Dodik, he said: “I’ll leave that question open. Whoever works in accordance with the Constitution does not need to fear anything. But if not, then I have a flexible answer. We will see what has to be done. But such things are not announced, they are done”.

The German diplomat pointed out that “Dodik must be understood as part of Bosnia and Herzegovina”, and that “things like January 9 must change, not because someone may or may not like Dodik, but because he must see it for himself.”

“The January 9 was practically created on the victims, the burden borne by the Srebrenica genocide victims. I can't let that happen. He [Dodik] is the RS President, not the President of the Serbs but of the multi-ethnic entity in Bosnia and Herzegovina. There are also Bosniaks and Croats [living there]. Because of this, we in the international community will initiate things that will be implemented in time to come, for the people who suffered from 1991 to 1995, with which we will do something for them. I already have some things in my head on that issue, we will not give in,” Schmidt noted.

Speaking about his presentation in the European Parliament behind closed doors, he said that everyone was of the opinion that “the High Representative must be supported”, but that there were also criticisms.

“I submitted the report openly. With all due respect to everyone in the EU, it is very important to understand BiH. I said that only the local MPs can change the Constitution. There are some who say ‘why do you use the Bonn powers’ while others say ‘you need to use them a bit more often’. There was a lot of support, but also criticism. Everyone wanted to discuss this more with me. A one-hour discussion was too short,” Schmidt concluded.