Sarajevo to erect monument to Tvrtko I Kotromanic, the first Bosnian King 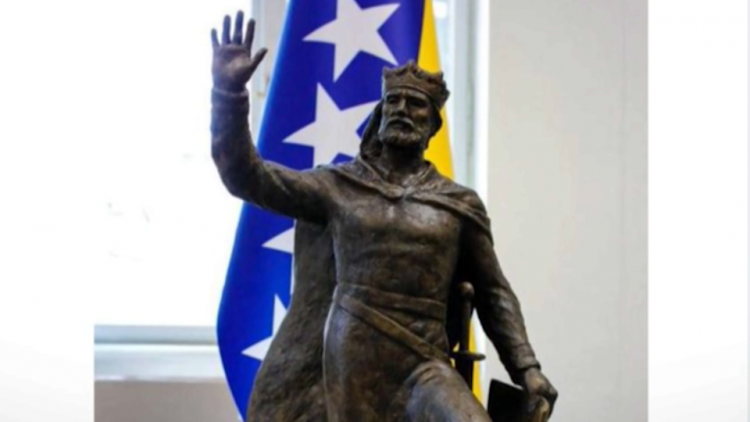 This year, the city of Sarajevo plans to erect a monument to the first Bosnian king, Tvrtko I Kotromanic, marking his reign as ban and later the king of Bosnia. The work of sculptor Stijepo Gavric was chosen as the best conceptual design for the monument, which will be erected in the park behind the BiH Presidency building.

“The award-winning work faithfully depicts the strong character and authority of the king, with a raised hand and an open fist, which both greets and stops. The sword behind the belt symbolizes readiness to fight, and the shield with lilies to defend the state of Bosnia,” this is how the Mayor of Sarajevo Benjamina Karic described the winning work of sculptor Stijepo Gavric for the conceptual design of the monument to the Bosnian king.

“There is also a big sword behind the belt, it is for the others who are not friends. He stands stable and secure. The cloak he is wearing is restless. It flutters. It served to me as a symbol of the time in which Bosnia is now, but also the past, the country’s always somehow in the windstorm,” said Stijepo Gavric, the sculptor.
Gavrić, who authored several other monuments, linked the construction of the monument to King Tvrtko I Kotromanic with the present time.

Bosnia and Herzegovina already has a monument to King Tvrtko erected last year in Tuzla by academic sculptor Adis Lukac.