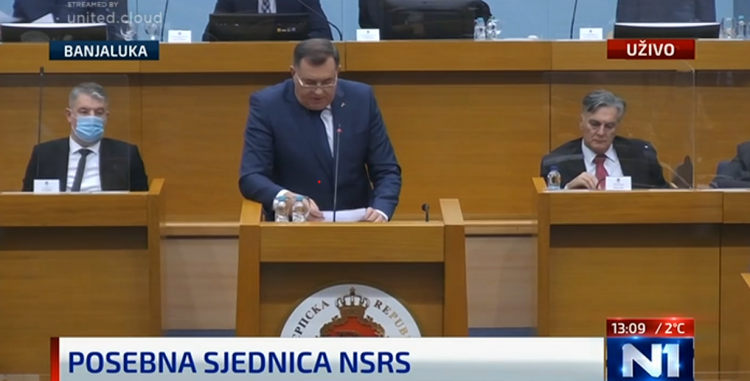 BiH Presidency member Milorad Dodik argued that Bosnia’s Republika Srpska (RS) entity agreed to the formation of BiH’s Armed Forces at a time when the overall atmosphere was a lot different and that it should now withdraw its consent to the decision, as he presented his initiative for the entity to “return its competencies” to the political representatives in the RS.

The RS National Assembly is discussing on Friday whether to start the process of unilaterally taking back competencies that were transferred to the state level through post-war reforms in BiH.

Those reforms led to the establishment of numerous key state institutions, including the army, judicial institutions and indirect taxation authority.

Dodik, who is the leader of the ruling party in the RS, wants the entity to withdraw from those institutions and create its own separate ones.

The formation of the BiH Armed Forces was requested from the outside, Dodik said, arguing that this “did not reflect internal needs.”

He noted that the atmosphere when the decision was made was different and that it was difficult to resist such a request and argued that the BiH army is unnecessary.

“I think that the consent should be withdrawn for the armed forces, that does not mean that Serbs should leave the Armed Forces immediately at this moment. We need to see what should be done with that, whether to reduce or halve the composition of the Armed Forces, to pass the Law on the Army of Republika Srpska or to pass the Law on Demilitarization of Republika Srpska,” he said.

Dodik stressed that the initiative represents an effort to uphold the Constitution of BiH and not political adventurism, arguing that the Constitution says that the armed forces of one entity must never cross the entity division line and enter the territory of the other one.

Dodik rejected the assessment that this is the biggest political crisis in Bosnia since the war, arguing that the country has been in crisis since “it was formed.”

“We must carefully weigh what our entity interest is,” he said.

Dodik stressed that the parliaments of the two semi-autonomous entities must play a stronger role in the setup of the state.

He said that there is a feeling that Republika Srpska is currently on a different path than what it agreed to in the Dayton Agreement.

“One by one, competencies are changing in favour of the state of Bosnia and Herzegovina and we do not notice that anyone is raising this as an issue,” Dodik said.

Dodik said he “does not believe that BiH can survive,” argiing that “there is no internal capacity or consensus.”

“The measure of our consensus is our rights, we do not want to interfere with the rights of others. Our rights have been severely degraded. Let us reject the practice of the international factor,” Dodik said.

He also commented on the possibility of facing sanctions because of his initiative.

“Some among us are calling for them to be introduced. Let us fight for our rights through political means. RS will not resort to military means. War is not an option,” he said, arguing that all he is doing is insisting on respect for the Constitution.

“What is important is that there is a necessary, strong majority here for these decisions to be made. That majority will also consider the new laws. We may decide that it is possible to model some things so that they remain at the level of Bosnia and Herzegovina,” concluded Dodik, noting that the transfer of competencies to BiH does not imply that the RS entity lost the right to decide on it.